Selections from "Edges of Books" 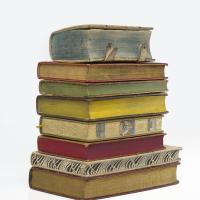 From October to December 2012, the Cary Graphic Arts Collection at Rochester Institute of Technology examined books from an unusual perspective. When books are on display it is usually their spines and covers, or the text and illustrations, that are featured. These are the familiar parts of the books, the parts that modern readers have come to interact with the most. The Cary Collection exhibition Edges of Books took a different approach, uncovering a tradition that extends back centuries to the very beginning of the codex book in which the edges of books were important sites for information and decoration.

This online exhibition is an abridged version of Edges of Books and of the exhibition catalog (https://www.rit.edu/press/edges-books). 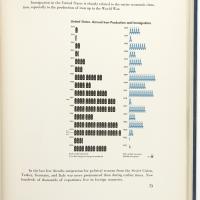 Otto Neurath (1882-1945) was an Austrian economist, social scientist, and philosopher. Starting in the 1920s he spearheaded the development of ISOTYPE (International System of Typographic Picture Education) a pictorial language designed to convey complex economic, social, and historical data. As Europe rebuilt after WWI, Neurath used Isotype to educate ordinary citizens—many of whom were illiterate or semi-literate—about the economic, industrial, and social forces that were shaping the 20th century. Neurath’s team created visual depictions of these forces, their historical evolution, and the connections between them. These works, published in books, portfolios, and on posters, were designed to give people the information they needed for effective democratic participation and decision-making. 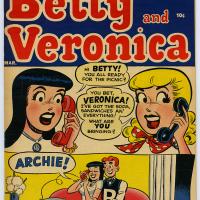 Comics were a staple of the American newsstand in the middle decades of the twentieth century, where superhero stories mingled alongside other prominent genres of the time: funny animal stories, Westerns, romance, and tales of suspense. The Stephen Neil Cooper Collection offers a one-of-a-kind glimpse into comics history. It contains 202 comic books that were present on American newsstands in April 1956. This unique collection, curated by artist and collector Stephen Cooper and donated to the Cary Graphic Arts Collection, offers a snapshot of the comics industry during a crucial period in the medium’s history. The “Comics Code Authority” had only recently been put into effect by 1956, so comics publishers were learning how to function within a newly-censored industry. And, since the history of popular comic books has largely privileged singular, collectible moments in comics publishing—such as the first appearance of major superhero characters, or the work of a particular artist—it is rare to have a relatively comprehensive view of comics periodicals from a specific moment. The Stephen Cooper Collection presents a snapshot of comics history in one of its major transitional moments.

Along with comics from the Cooper Collection, this exhibit also features work from a spring 2019 project course entitled “Comics in the Archive”, in which students participated in the creation of a digital archive as well as data visualizations and analyses of this unique archive of comic books.

View all covers from the Cooper Collection on RIT's Digital Collections site: https://digitalcollections.rit.edu/luna/servlet/s/sot9yi